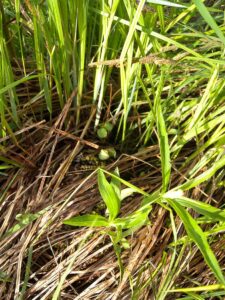 Leaf Litter from previous growing seasons is the main source of detritus for this sedge meadow.

Detritus is debris or waste of any kind.  When we think specifically of detritus in lakes and wetlands we think of the undecayed organic matter of plants and animals.  It is this that is typically the main source of nutrients in a body of water.  The source of detritus can be organisms the grew within the lake, or those that came outside it.

Outside sources of Detritus

Erosion can bring in all kinds of organic matter, usually from plants.  Depending on the location of a body of water or wetland the main source can be quite variable.  In a river with a large floodplain the main source may come from when the river overflows its banks and picks up organic matter from flooded wetlands, farm fields and woodlands.

A small lake, or rivers big and small in a forested setting may get most of their nutrient inputs as leaf fall.   The leaves of overhanging trees land in the water, sink and aquatic organisms begin to break them down.  First come the “shredder” invertebrates.  These are able to shred tough leaves into smaller pieces that they eat, or the scraps are eaten by others.   Then an assortment of other invertebrates continues to eat the smaller sized pieces, or the microorganisms that further break them down.  Without this source of nutrients many streams would be sterile. 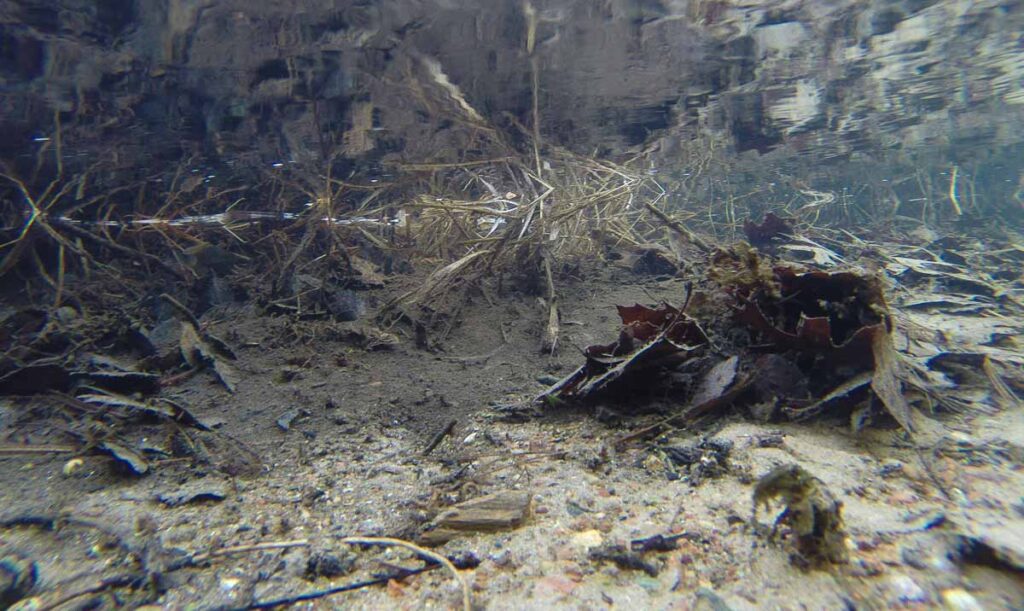 Detritus at the edge of Emmons Creek in February consists of fallen leaves, and emergent plants growing along the bank.

Some lakes, like those high in the mountains, have little or no surrounding source of nutrients.  Without inputs these lakes can be largely absent of aquatic life because there is nothing to feed algae or aquatic plants, and therefore no source of energy to move up the food chain.

As detritus breaks down into smaller and smaller pieces it eventually turns into muck, which can still be high in nutrients.  Because muck is made of such small particles it is easily washed away, unless it is in some protected bay or colonized by aquatic plants.

Sometimes, the environment prevents the complete breakdown of plant detritus.  When this happens over time, peat forms. Peat is mostly made up of the leaves, stems, and roots of mosses, sedges, and other plants of bogs, sedge meadows and other wetlands.

This entry was posted in Definitions and tagged Detritus, nutrients, Streams, wetlands. Bookmark the permalink.