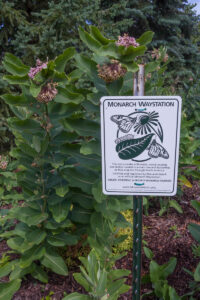 The Common Milkweed (Asclepias syriaca) is probably best known as one of the host plants for the Monarch Butterfly caterpillar.  It makes a great addition to the garden, but can be rather aggressive.

The seeds in this video were collected from the milkweed plants in my garden in late winter, so they were cold treated by nature. Video is taken over 15 days.  Seeds were first planted and water seven days prior to that. 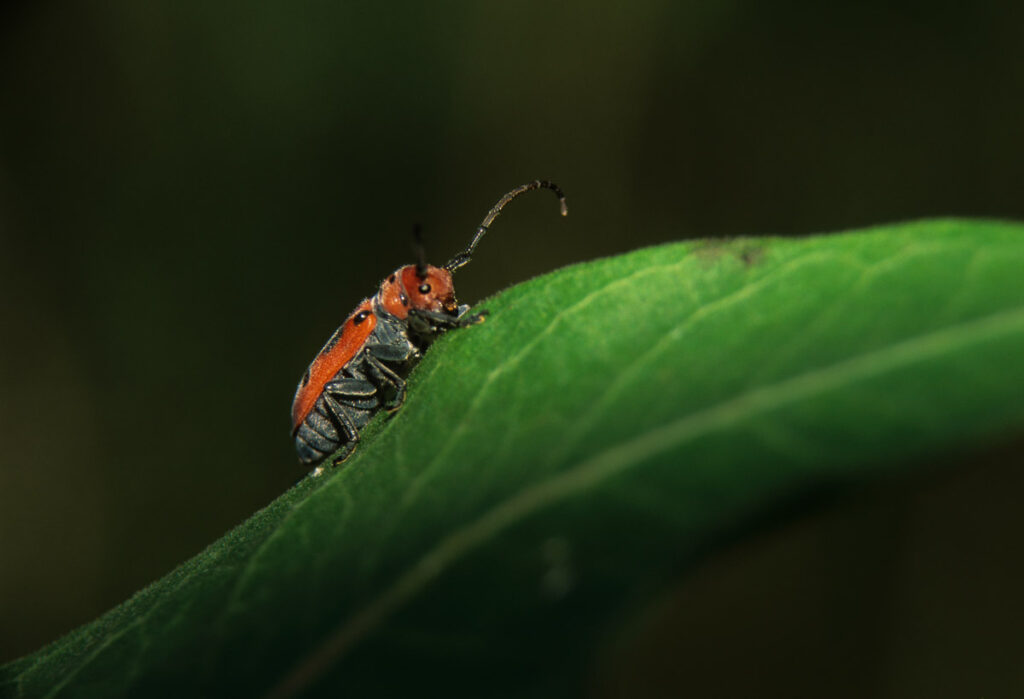 A Milkweed Beetle (Tetraopes tetrophthalmus) rests on a Common Milkweed leaf of course.

Information on the Milkweed Family – Asclepiadaceae

Worldwide there are 315 genera and ca. 2900 species (Woodland 2000). Most members are found in the tropical or subtropical regions of the world. They are often herbs, woody or herbaceous vines and seldom trees or shrubs. Fruits of the Asclepiadaceae have two follicles (usually only one matures) and the seeds are usually comose (Zomlefer 1994).
The inflorescence is a solitary flower or flowers borne in cymes, racemes or umbels with interesting adaptations involving insect pollination and reduction of self-fertilization. Before looking at the interesting morphology let’s see the regular floral characteristics. “Flower: somewhat unusual, regular perfect; hypogynous or epigynous. Sepals: 5, connate toward base, sometimes reflexed. Petals: 5 sympetalous, lobes spreading or reflexed, commonly with appendages. Stamens: 5, filaments connate, adnate to the stigma forming a structure gynostegium and with hood-like corona and/or horn appendages; the corona alternates with the petals and is adnate to the corolla; anthers have 2 locules each filled with a waxy mass of pollen (a pollinium); each pollinium attached to adjacent anther pollinium by a translator arm, each arm joined to the pollinium translator by a gland, thus allowing a visiting insect to remove the entire pollinia by the translator. Pistil: 2 carples, free at the base but connate at the stigma; locule 1; ovules many and borne on the parietal placentas: ovary superior or partly inferior; style 2 but fused as 1 at the stigma.”(Woodland 2000)

Insects are attracted to the nectaries of milkweeds. Nocturnal insects are the most efficient pollinators of Asclepias, but the great numbers of diurnal insects pollinate these plants the most (Jennersten Morse 1991). Would be pollinators of Asclepias syriaca such as ant and skipper butterflies can get their legs stuck in the pollinium, so stuck that they cannot break free, and they can sometimes be found dead on the flowers (Southwick 1983).
Ecology
The Asclepias have many interactions within their environments that are well documented. In addition to the flower morphology already mentioned, the most well-known thing about the milkweeds is their toxic milky sap. The milky sap contains latex which gums up the mouth parts of herbaceous insects and contains cardenolides which affect the movement of sodium and potassium ions in the cells of all animals. By favoring the flow of sodium ions into the cells this can lead to an increase in the force with which the heart contracts (Agrawal, Macolm 2002).
An insect grazing on Asclepias may find itself dead if it does not have some mechanism for coping with the plant’s poison. Famously, monarch butterfly larvae incorporate the toxins into their bodies and become toxic and distasteful to predators, as do milkweed beetles, aphids and other insects. Some insects, like the Labidomera beetle and the weevil Rhyssomatus linearicollis, sever or pierce the leaf vein which reduces the flow of latex above the cut, allowing the insect to feed without a sticky mess (Agrawal, Macolm 2002).

Members of the Asclepiadaceae have few current economic uses beyond the Asclepias and others used for ornamentals. Some Cryptostegia spp. may be useful for the commercial production of rubber (Woodland 2000). In the past many Asclepias spp. were put to different uses by Native Americans. Despite their toxic nature there were ways to use them as food. The Menominee used the flower heads in soup and cornmeal mush. The Winnebago ate boiled young sprouts, floral bud clusters and young, firm green fruits for food. They were also used as drugs for gynecological, gastrointestinal, dermatological, and urinary tract problems. Perhaps these many uses came from the toxic compounds found in the milky sap of the Asclepiadaceae. Maybe because of the association of the milky sap to mother’s milk, the plants were used for mastitis and to increase production of breast milk (Moerman 1998). As mentioned earlier the Asclepias contain cardenolides that make the heart contract more forcefully, this was put to use by many Native American tribes for chest pains and other heart troubles. If uterine muscles are affected in the same way as heart muscles, then perhaps Native Americas gave the plant after childbirth to help the uterus contract and push out the afterbirth.
I have seen strips of the epidermis of A. syriaca stems used in many bird nests, especially the hanging baskets of Baltimore Orioles and I also witnessed an American Robin in the front yard of my parents’ house stripping this layer off for its nest. Presumably Native Americans made the same observation, because they made good quality cordage from this plant and others of the same genus (Moerman 1998).

Many species of Asclepias are doing fine in their natural environments, but some are listed as endangered or threatened by state and federal governments. In Wisconsin Asclepias purpurascens is listed as endangered and A. ovalifolia, A. lanuginosa, and A. sullicantii are all listed as threatened. None of these species is protected under federal law. The listing at state level seems to be a token effort to make us feel that our flora is being cared for by the Department of Natural Resources, but in reality it does next to nothing. It is illegal to process or sell any plant that is listed without a permit, but you may destroy them or their habitat on private land. They are protected on state-owned lands unless they get in the way of forestry, agriculture or utility activities. I hope that the conservation community will help protect these species and our other native flora. A. meadii, a milkweed of the tallgrass prairie which was only once collected in Wisconsin, is now a federally endangered species, and like many other rare prairie species, is widely distributed to only about 100 sites because of massive habitat destruction (Stein et al. 2000)

The Asclepiadaceae is a diverse and interesting plant family. The many properties of Asclepias syriaca that fascinated me as a child; the milky sap, the use of the plant by monarch butterflies as food and the comose seeds, continue to bring me enjoyment. Learning about the advanced pollination mechanisms in scientific literature helps further whet my appetite for knowledge about this species and others of its genus.