Wild rice is divided into the two species above and as one species with many varieties.  There seems little agreement on the divisions. 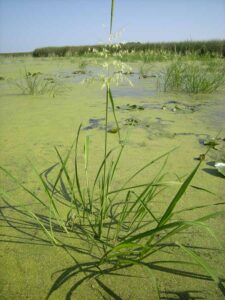 What can I say about wild rice?  There is so much to this complicated plant.  Wild Rice is an aquatic and wetland grass, not closely related to cultivated rice.  It is odd plant in that is an annual, when the vast majority of aquatic plants are perennials.  Wild rice was a crucial part of the diet of many Native American tribes and still holds a place of spiritual, cultural, and economic importance for them.  For me, its history and biology are full of mystery and awe.  Reading about the history of wild rice and its former abundance in my area of Central Wisconsin is like reading about Tolkien’s Middle Earth only that if a few places, and in good rice years, its grandeur can be visited, if only for a short time.

The Ecology and Biology of Wild Rice

Wild rice is, in many ways, both a fragile and strong plant.  As we see, it is vulnerable to many things, but it has evolved in a unique way among temperate aquatic plants.  A wild rice plant has only one shot at life.  As a seed, it will fall onto the water and immediately sink.  It has little use to move to a new location because it will have no competition with its parent plant, which will die in a few weeks.  The seed has two major problems if it is to grow.  The first is it must not be eaten, the second it must not dry out.   Unlike most seeds, a few days of exposure to the sun and air is fatal to the embryo inside.  If it avoids these two fates it is still in for a bumpy ride after germination.

After overwintering most rice seeds begin to grow after ice-out.  Some will remain in the sediment for five years, but not much longer before germinating.  This is a bit of an insurance policy against all seeds germinating in a bad growing season, as we shall see.  Water levels are perhaps rice’s major enemy even above wildlife and may contribute more to a bad rice year than anything else.   The wrong water level situation at the wrong growth stage can be fatal. 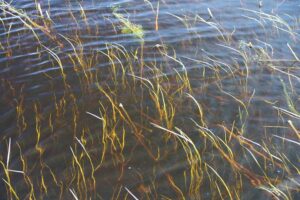 Rice seed must remain underwater to avoid drying out, so in spring the germinate long ribbon-like leaves, this is its submergent phase.  Next is its floating leaf stage, where those long ribbon-like leaves float on the surface and look a bit like some species of burred (Sparganium spp.)  It is at this stage that the plant is very vulnerable to a rapid increase in water levels.  Like most aquatic plants wild rice is buoyant so its leaves and stems will rise in the water column to where the most sunlight is.  Because rice is an annual it has a week root system early on, the extra buoyancy provided by the floating leaves is often too much to overcome should they be re-submerged.  The entire plant simply rips out, floats away, and dies.  Such a rapid increase in water levels coupled with wind and waves can destroy an entire wild rice crop.

Just as a rapid rise in water levels during the floating leaf stage is very detrimental to rice plants so can be a rapid decrease in water levels as the plant enters the emergent phase.   During this time the weight of the plant is supported by the surrounding water.  When the water falls rapidly the support is lost and the plant can topple over.  As the season progress the root system becomes stronger, the stems grow prop roots, and rice plants can tolerate a complete loss of standing, water, but the ground must remain saturated with water, or very moist.

At any time during the growing season plants are vulnerable to natural wave action and wakes caused by boats and personal water craft.  However, I have seen rice growing fairly well in areas subject to these conditions.  Another instance when wild rice seems to happily defy anything written about it.  Wild rice plants must also contend with wildlife damage, primarily from muskrats and geese.  In some areas, wild rice grows abundantly next to houses and cabins and is removed, often illegally, for the sake of navigation and recreation. 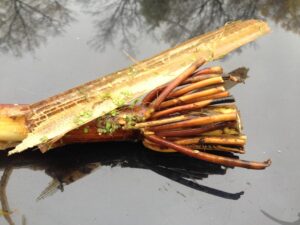 Much like corn, wild rice has prop roots to prevent the plant from falling over.  These have been cut.

With all these vulnerabilities its seems to be a miracle that wild rice grows anywhere, particularly in areas affected by humans.  Unfortunately, it is in decline in most localities affected by humans.   However wild rice has a few tricks up its sleeve, or stem, I guess.  For one, its highly nutritious seed is no accident, it is not just some chance benefit to man and wildlife.  The grain is packed with energy and the nutrients it needs to rise up into the water and reach for the sun. In contrast the small seeds of many wetland and aquatic plants, can only sprout under perfect conditions.  Second, it can produce a large quantity of seed at irregular intervals that can overwhelm seed predators, much like another grass, bamboo.  The third is the manner in which the seeds ripen.  The do not all ripen at the same time, but over several weeks, and when they ripen they “shatter”.  Shattering means that when a rice plant is disturbed by wind or animals all the ripe seeds drops into the plant and most often into the water.  Once in the water it is safe from most species a birds.  Third each year the stand or rice is brand new, there is no competition of resources with parent plants.  The only drawback is that is that heavy residue from a previous years can make growth difficult for young plants.

One of the amazing things about wild rice its potential to grow an abundant and highly nutritious crop of grain that benefit both man and wildlife.  The stems are great food and a source of building material for muskrats, but the industrious mammals construct their structures out of many species of emergent plants.  It is the birds that truly take advantage of the abundance of seed.  Wild rice can produce 500 lbs of seed per acre in a good year.   A bumper crop attracts many species of ducks, blackbirds, rails, and other birds to the rice beds.  Entering a stand is a good way to observe these birds not by sight, but by sound.  A dense stand of rice will hide them well, and although you may be a few feet away, they are reluctant to flee.  The cover and especially the nutritious seeds and dense cover makes them inclined to stay put.

I have been in a dense stand of rice and heard birds all around me, some only a few feet away, but I caught no glimpse of them. There were sora, wood ducks, blue-winged teal, and red-winged blackbirds all around calling. The wild rice was alive with sound.  I too felt alive.  I have also been in relatively quiet stands.  Last year I came across a flock of blackbirds that would not move, or make much noise, were the so stuffed, like people after Thanksgiving dinner?  It was the most lifeless flock of blackbirds I have ever seen.

The nutritious rice powers the southern migration of many birds fattening them up for the trip.   In spring, the reaming seeds have sunk into the sediment but are still available to many ducks.  These birds can gobble up too much seed, particularly in small or thin stands, and hasten the rice’s decline.  In summer geese can take their toll, grazing the foliage, and as mentioned muskrats both eat the plants and use the foliage for constructing their houses.  However in most places the rice carries on as it has for years.  It has a strategy to cope with these pesky animals and humans to as was seen in the biology section.

Planting wild rice is extremely easy compared to most aquatic and wetland species, getting it to actually grow and establish is a much greater problem.   As mentioned in the biology and ecology section wild rice has many vulnerabilities, many of which cannot be overcome by the average grower.  All we can do is try to select the right location, follow a recipe of sorts, and hope water levels and wildlife cooperate.

The other important things to consider are the size of the planting and the frequency of the planting.  A small planting will be more vulnerable to wildlife damage.  A few hundred square feet could easily be consumed by a single muskrat in a season, or a flock of geese in an afternoon.  Even a few thousand square feet may be too small.  Over the course of five years, wild rice may have one major, one good, two fair, and one bust crop due to natural annual variations.  Therefore the chances that you plant in a bad year are better than 50/50.  By planting for several years you increase the chances that you will get conditions for at least a good year of seed production.  In addition, because not all wild rice you see is the result of one year’s seed production, but of the previous five seasons, a single season of planting does not replicate a natural wild rice stand.   A single planting can yield one good year but is much less likely to result in a long-term establishment.  The current recommendation is planting several acres at time and annually over the course of 4-5 years to increase the likely hood of long-term establishment.  Even on former rice lakes wild rice, this may still not work if water quality and water level conditions have changed considerably.

Wild rice was the staple of many Native American Tribes, similar to that of wheat, potatoes, or corn to some civilizations, by providing the single most important source of calories in their diet.  There are two major differences between cultivated grains and starches and wild rice.  Wild rice was never cultivated, and has not been bred to be larger or easier to harvest before the twentieth century.  It evolved to withstand human harvest just like the feeding of birds.  While it wasn’t directly cultivated it likely individuals purposely spread it to water bodies with no rice in ancient times, and is definitely planted today.
Nutritional Content of Native (uncultivated) Northern Wild Rice (Zizania aquatica)

Today wild rice is still gathered by the traditional method of poling a canoe through wild rice stands and gently knocking the grains into to the bottom.  Later the grains are parched, and processed to a form that will allow for long-term storage and sale.  The grains purchased in stores will never grow since they have been heated and dried. 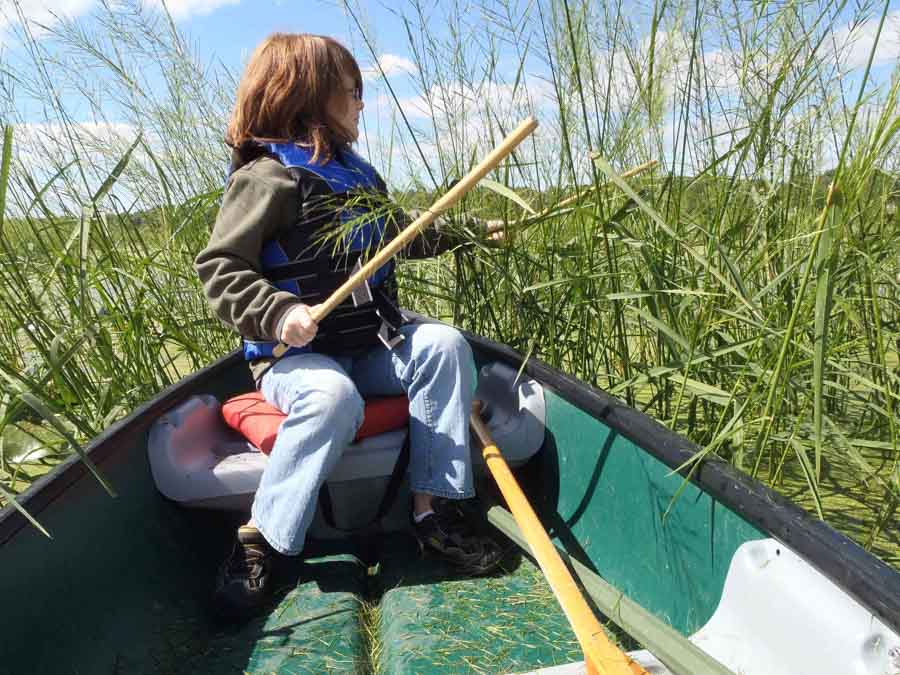 Wild rice (zizania sp) harvest on Buffalo Lake for planting on Lake Puckaway. Stay tuned to see how it grows in 2015.

In the twentieth century, enterprising farmers began to grow rice in flooded fields and manipulated water levels to increase yields and ease harvest.  They also began to selectively breed out wild rice’s characteristics that are essential to its wild survival, namely shattering.  Wild rice plants must be visited repeatedly since the grain ripens over several weeks and falls off as soon as it ripens.  The now tame rice as it is called holds on to its seed over the ripening times so it can be harvested at once.  It is somewhat sad to see this happen to such an amazing plant, which is of such spiritual importance to native peoples, but I suppose it was inevitable.  I encourage the purchase of the natural growing stuff to support local economies and to support the habitat itself.  The big farmers will still sell plenty of rice, don’t worry. 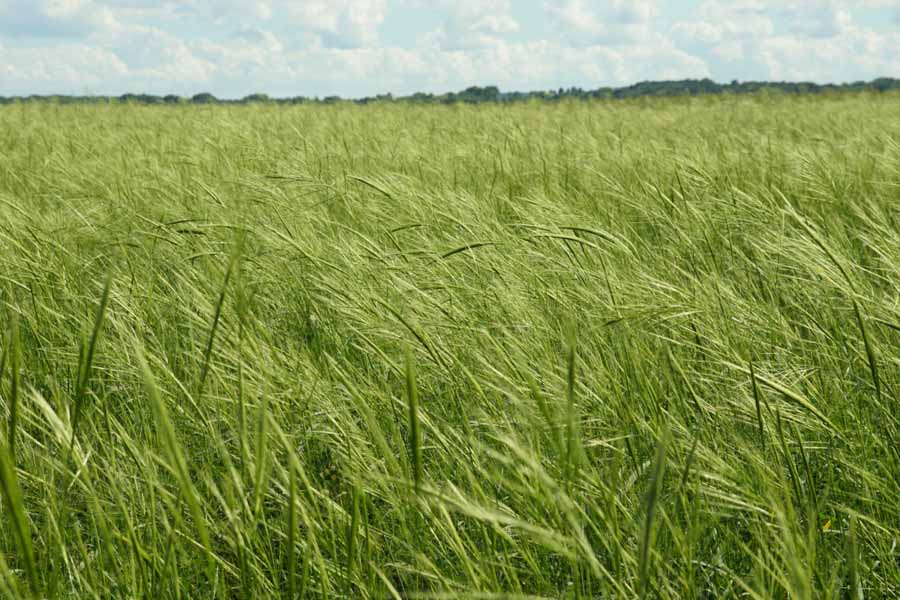 A dense and healthy Wild Rice (Zizania sp.) blowing in the wind.