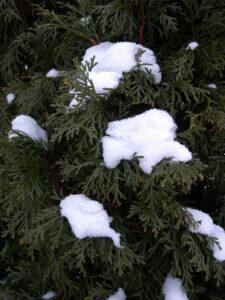 Every plant book begins by telling you that this really isn’t a true cedar like those of Lebanon, it is closely related to cypress.  I feel better now that’s out of the way, but the next thing they’ll mention is the plant is sometimes called Arborvitae, which means “tree of life.”  It is believed to be given this name because a tea brewed from its leaves contains vitamin C and can prevent and cure scurvy.  White cedar, most often under the name Arborvitae, can be found in all shapes and sizes at garden centers.  In many areas of Wisconsin, Minnesota, and Michigan, Northern White Cedar is found growing along rivers and lake shores, and also forming dense stands in cedar swamps. 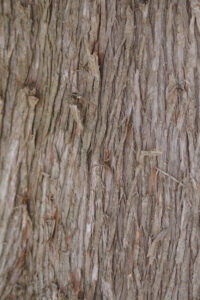 The bark of Northern White Cedar has a somewhat shredded appearance.

Cedar swamps are made up of dense stands of cedar trees and are important winter areas for white-tailed deer.  Deer will “yard up” in large numbers, and will browse all the foliage they can reach leaving a distinctive browse line in the swamp, or in your garden for that matter.  When deer population are too high no white cedar seedling will ever grow into a mature tree.  The deer rely on these cedars as an important winter food.  Their browsing of the trees and seedlings could be harming future deer populations.  It has been said that without recruitment the cedar swamps in the North Woods may die out.

Cedars reproduce by tiny winged seeds found in small cones.  The wing or samara on the seed helps catch the wind and transport it away from the parent tree.

For many Native Americans the white cedar is a sacred tree with many uses.  The Chippewa used the wood for sturgeon spears, so if you’re looking to make a traditional spear go with cedar.  Cedar is still used for arrow shafts.  Its wood is rot resistant and is used in fence posts, bird houses, and over my head 110 year old cedar shakes are keeping the snow out with the help of three or four layers of asphalt shingles.  Anybody want to help put on a new roof? 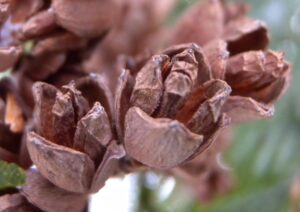 The cones of Northern White Cedar. 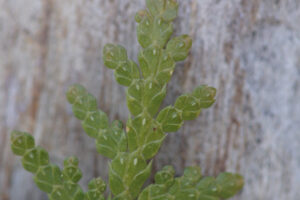