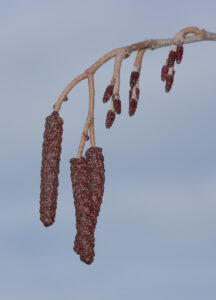 Speckled alder (Alnus rugosa) is a shrub to small tree that gets its name from the lenticles on its bark.  These structures are not for decoration.  Lenticles are common on woody wetland plants, they help get oxygen down to root systems in anoxic soil conditions.  Alders have the unusual ability to fix atmospheric nitrogen N2 into ammonium NH3 with the help of nitrogen-fixing bacteria, which live on root nodules.  This form of nitrogen can then be used by the plant.  As alder leaves decay the nitrogen is released into the soil, enriching the wetland.  This changes nutrient flow in wetlands and alters plant communities.

Alders often grow along streams, rivers and lakes.  Sometimes they can form impenetrable alder thickets.  In sedge meadows and other marshes alder can invade and replace these communities in the absence of fire and grazing.  I often notice that the invasive reed canarygrass lives in the under story of speckled alder.  It could be that the extra nitrogen produced by the shrubs’ associated bacteria help facilitates the invasive grass.

Speckled alder is an important food source for American Beavers and winter food for white-tailed deer.  Many birds also eat the small seeds.

In early spring, often before the snow melts alders begin producing male and female catkins.  The male (staminate) cattkins are long cylindrical structures.  The female catkins are smaller and are wind pollinated.  After pollination the female catkins change into something resembling a pine cone, inside which tiny nut-like winged seeds are produced.  The woody alder cones persist on the plant into their second year.  The Speckled Alder also reproduces asexually–branches that come into contact with the ground will produce roots and help the shrub spread. 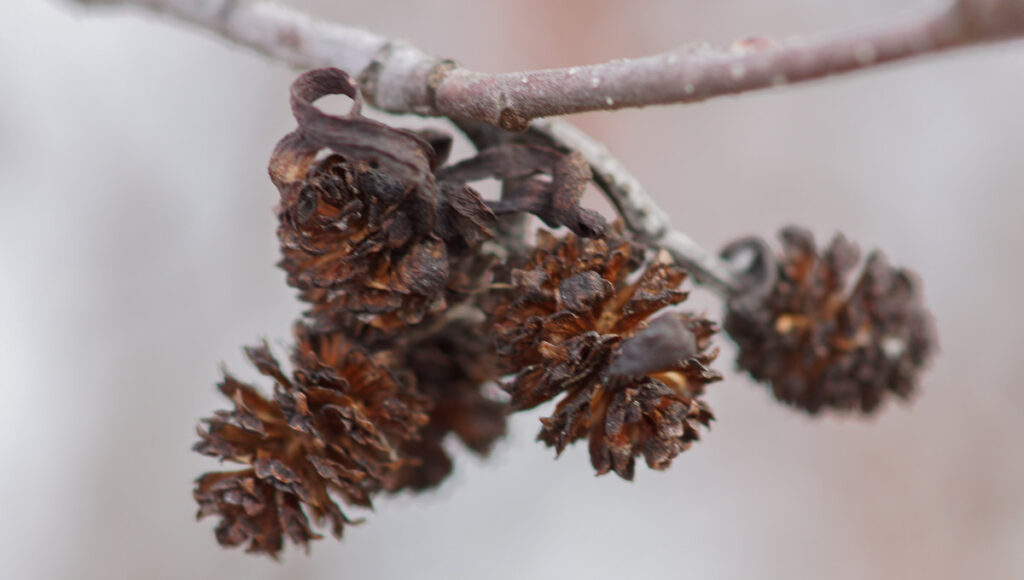 Speckled Alder is sometimes a small tree up to five inches in diameter so it is of little commercial use, but I have made some good walking sticks from it in a pinch.  Probably its greatest current use by humans is helping prevent erosion along the banks of streams, rivers and lakes.  Formerly this alder was used by Native American tribes to treat toothaches, sore eyes, and to induce vomiting.  A yellow dye was made from the catkins and a reddish-orange dye made from the bark.