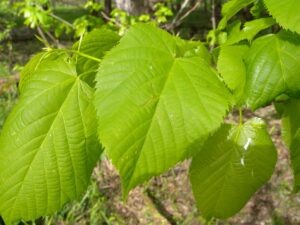 New American Basswood (Tilia americana) leaves in spring sporting are yellow-green color. Later in the season they will be a deep green.

American Basswood (Tilia americana), sometimes called Linden, is a tree found in our swamps, but it is most often found on uplands.  The seeds are dispersed on a unique structure that catches the wind.

The tree is also a valued street tree, as is its European cousin and hybrids.  The honey made from the flowers of basswood is light in color with distinctive bite to it.  Native Americans and pioneers used the inner bark to make rope, and twine used for sewing baskets and fish nets.  Basswood is prized for its soft clear wood by wood carvers and almost no one else; therefore it ends up in pallets, excelsior, interior furniture parts, etc.  A nice chunk of basswood sits in my garage patiently waiting to become a duck decoy.  Maybe this is the year…