What is the difference between emergent, submergent, and other aquatic vegetation?

emerge or have a large portion of their shoots, leaves, or flowering structures out of the water.  These include the familiar cattails, bulrushes, wild rice, sedges, bur-reed, and many others.  Emergent vegetation can refer to any wetland plant that is above the water. However, for the purposes of this website, I will categorize a plant as emergent only if is frequently aquatic in its habit. 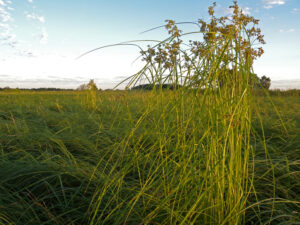 A tuff of Wood Grass growing high above the other vegetation of this sedge meadow.

plants that have most of their structures below water.  Common examples of these would be coontail, milfoils, and many pondweeds. 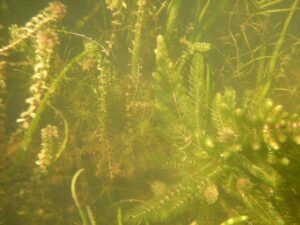 A mass of submergent aquatic plants: Coontail, Common Waterweed, Pondweeds, and even some Chara algae

have floating leaves.  They include the water-lilies, some pondweeds, and American lotus, although the latter often protrude from the water. 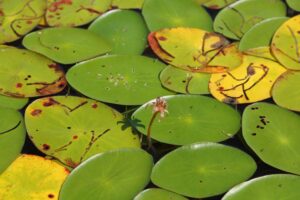 these non-rooted plants include the duckweeds, common bladderwort, and often coontail.  Coontail is sometimes rooted, but it is dislodged easily by wave action and will continue growing in a floating mass or tangled in with other plants. 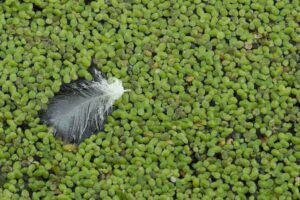 Lesser Duckweed (Lemna minor) is a free-floating aquatic plant often mistaken for algae, but it is, in fact, a flowering plant.

Some plants have a mixture of different stages of growth.  As mentioned above, American Lotus can be a floating-leaf plant or the leaf can emerge from the water on its stems.  Some pondweeds have both underwater (submergent) leaves and floating leaves.  Coontail, which is one of our most common aquatic plants, is often not rooted and drifts around, getting caught in other vegetation.  These differences can be somewhat confusing, and most often, these species with “in between” growth patterns are labeled one or the other.

Note:  Most often freshwater aquatic plants are referred to as weeds or even seaweed.  This is unfortunate as weed is a very negative term.  Aquatic plants are essential to lake health.  In science, we often call aquatic plants, aquatic macrophytes to include some of the macroalgae like chara and nittella.