Open bogs are plant communities where sphagnum moss (Sphagnum spp.) dominates the ground vegetation.  Bogs are also home to many species of sedges, shrubs and wildflowers and strange carnivorous plants like Round-leaved sundew (Drosera rotundifolia).  A floating layer of mosses and other plants often ring small northern lakes.  This layer will slowly envelop the lake until it encapsulates the open water. 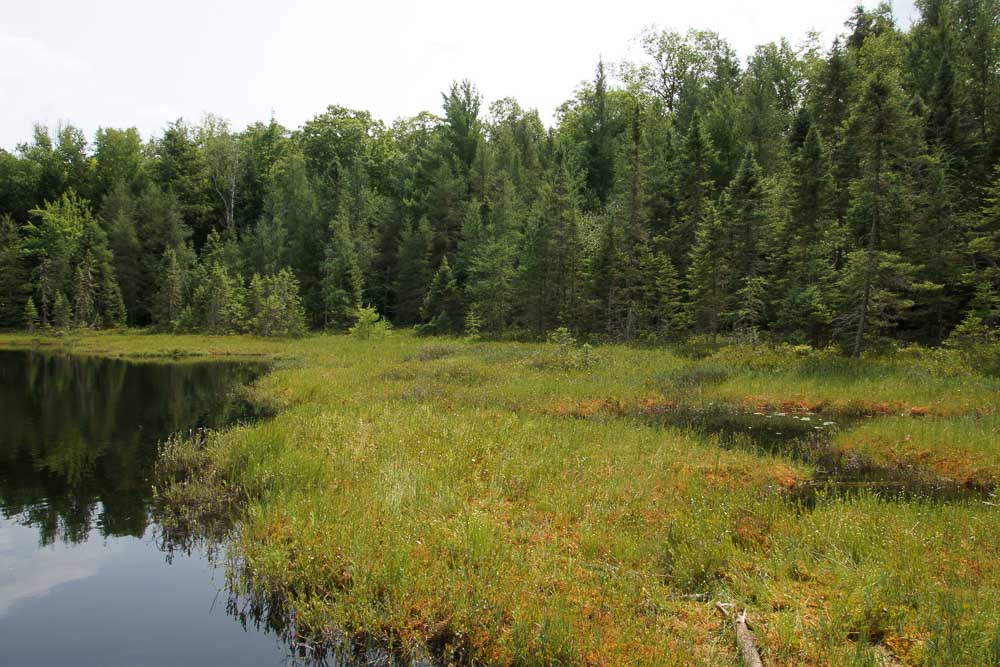 A floating bog rings this Northern Wisconsin lake. The lake depth at the edge of this floating mat is from 3-6 feet deep.

Bogs are amazing wildernesses because they have little economic value.  Stepping into a bog is like stepping back in time for two reasons.  In the southern half of the Midwest they are remnants of the landscape that flourished after the glaciers retreated.  Second, they are seldom visited.  Maybe a deer hunter wanders through every once and while, but on a large bog there is good chance you might be the first person to walk through in decades, perhaps a century or two.  Even if that is just wishful thinking, look around and you will probably be hard pressed to find any sign of man.  Most wilderness areas in WI, MI, and MN will have an abandoned logging road or railway, the remains of a camp, or garbage left behind by hunters and hikers, but not so the bog.

This of course does not apply to all bogs, and bogs are far from safe from the modern world.  Putting climate change aside, bogs are still being severely degraded for cranberry production, and the harvesting of peat for gardeners and fuel.  In my home state of Wisconsin we celebrate our growing cranberry harvest, and the destruction of unspoiled wilderness.

Coniferous Bogs have a similar ground layer of sphagnum mosses and sedges, but has the addition of mature tamarack and black spruce trees.  Coniferous bogs can be home to spruce grouse, gray jays and other species of the boreal forests. A coniferous bog with a carpet of sphagnum moss and a conopy of Tamarak, with a few Black Spruce and Eastern White Pine thrown in.