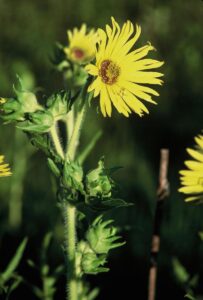 I have been interested in the Compass plant (Silphium laciniatum) for a very long time because I was introduced to this species by Aldo Leopold’s 1949 essay Prairie Birthday. He gives a natural history of a flowering plant, something I had never been exposed to in my life. I first read this essay at age fourteen and although I did not encounter an individual plant for another five years, it was always in the back of my mind. I had no idea that a plant could grow six feet above the ground and another fourteen feet below (Weaver 1954). S. laciniatum, I also learned, was an important part of a larger and nearly lost ecosystem called a prairie. There it interacted with the native fauna, Native Americans and European Settlers. For me compassplant has also become a symbol of the prairie restoration movement.

The scientific name for compass plant comes from the Greek word silphium, which means “medicinal plant” and laciniatum which combines two words to mean “torn occiput”(Borror 1988) . However according to the Robert W. Freckmann Herbarium website (2004) Silphium refers to resinous juice and laciniatum which means lacerated. Either way these meanings are fitting for the compass plant. Common names for compassplant include: rosinweed, pilotweed and gumweed. The Compass plant belongs to the order Asterales and the family Asteraceae, for a more detailed phylogenic tree see table below (USDA, NRCS 2004), which for some reason leaves out the phylum it belongs to: Anthophyta. 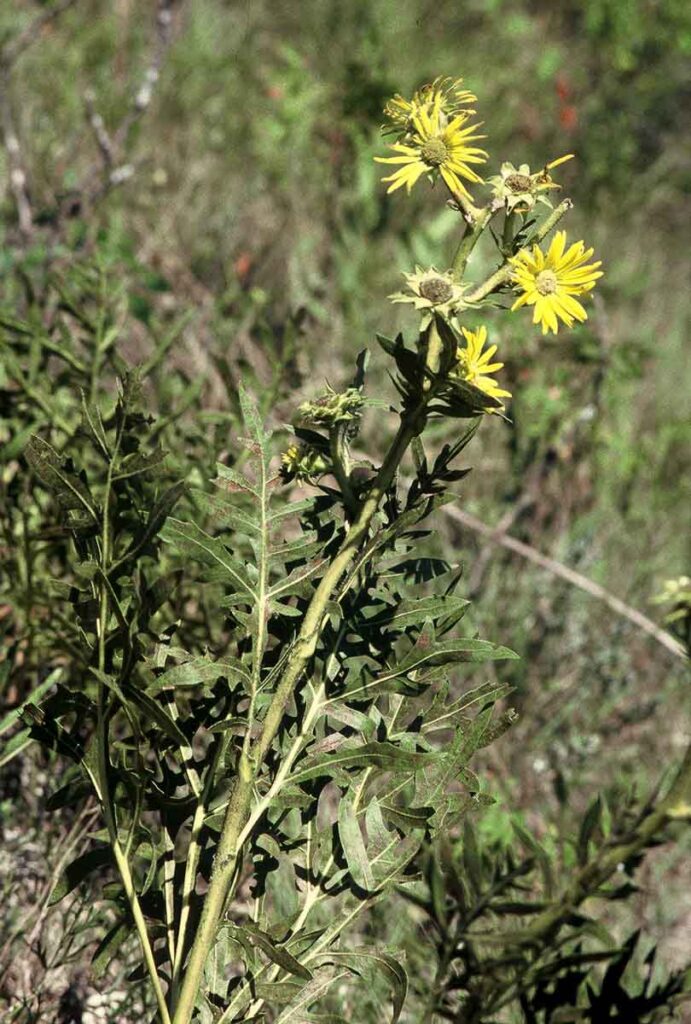 The family Asteraceae contains 346 genera and 2,687 species in the U.S. and Canada (Zomlefer 1994). In the United States the genus Silphium contains fifteen species (Gleason and Cronquist 1991) and S. laciniatum has two variations: lacinatium and robinsonii (USDA, NRCS 2004). It is found scattered throughout much of the United States east of the Rocky Mountains. In Wisconsin it is found in the Southwestern part of the state (see maps). 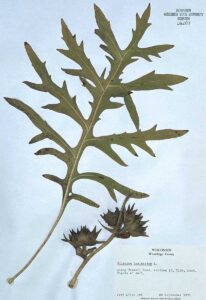 Compass Plant is found in prairies and their remnants. According to Curtis (1959) Compass Plant is most frequently found in mesic prairies but it is also encountered on xeric prairies. This species is an indicator of original prairie and is listed as an eight on the coefficient of conservation (C) scale. Here is a description of the C value from the Wisconsin State Herbarium (2004) “A number on a scale from 0 to 10 represents an estimated probability that a plant species is likely to occur in a landscape relatively unaltered from what is believed to be a presettlement condition.” In other words if you happen upon this species while hiking its likely to be found in a segment of an original prairie. Since it is large forb producing flowers on stems 1-3 m in height (Gleason and Cronquist 1991) it can be a beacon to those looking for prairie remnants. 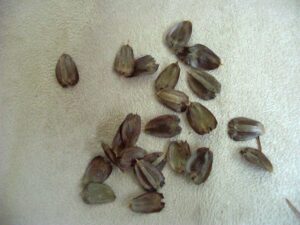 The propagation of Compass Plant is almost always done with seed because of its large and deep taproot, although cuttings can be made from the root. The seed heads are best collected while still green and then allowed to dry, but in October they may also be collected when dry (Packard and Mutel 1997). Germination of the seed is helped by treatment called stratification (Smith and Smith 1980). Green and Curtis (1950) found that seeds collected in 1938 had a 25% germination rate after two months of stratification, while 0% of the unstratified seeds had germinated. However when they studied a group of seeds collected in October 1944 that were stratified outdoors for five months they had a 96% germination rate.
Despite having coarse, and bristly leaves and stems, Compass Plant was relished by grazers like cattle and by our native Bison (Bison bison) (Curtis 1959). When cattle were set loose on a virgin prairie they quickly ate all the Silphium before eating anything else (Leopold 1949). Birds enjoy the sunflower-like seeds, and butterflies and other pollinators come to the large 4-8 cm diameter flowers. Compass Plant like most other plants has a symbiotic relationship with micorhizal fungi (McDougall and Glasgow 1929). The deep root helps the plant through drought and compass plants fared well like many of the deep-rooted prairie plants during the great drought of 1934 near Lincoln Nebraska (Weaver et al 1935). 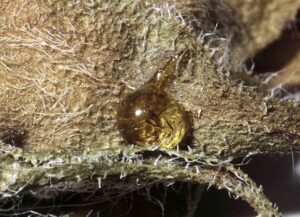 Close up of rosin on the underside of a S. laciniatum flower taken from a University of Wisconsin Oshkosh Herbarium specimen. Photo © 2004, the author

Both Native Americans and white settlers found many uses for the Compass Plant. The settlers quickly observed that the plant orientated its leaves in north/south directions away from the sun. Thus S. laciniatum helped point the way on the featureless prairie. Most leaves turn toward the sun, but Compass Plant gets its name by avoiding direct sunlight, because of this it has an equal number of stomata on each side (Alvord 1882). Native Americans and whites alike used the resinous sap as a chewing gum (Peterson 1977); this is where this plant and the Silphiums in general get their common name the rosinweeds. The Dakota, Omaha, Pawnee, Ponca, and Winnebago tribes burned the root as a charm against lightning (Moerman 1998). Medicinal uses include treatments for coughs, lung ailments, asthma, gonorrhea and intestinal worms (Foster and Duke 1990).

Compass Plant first gained my attention in Leopold’s story of a plant struggling against the highway department adjacent to a pioneer cemetery sometime before my parents were born. After seeing this strange looking sunflower-like plant in the wild, planting it in my garden and now doing a paper on this plant I know more than I ever thought I would about it. I am still curious to see and learn where its long taproot goes to and why. I don’t know what other secrets this prairie forb holds, but I look forward to learning them.

Curtis, John T. 1959. The Vegetation of Wisconsin. Madison. The University of Wisconsin Press.

The Nature Conservancy. 1997. The Places We Save. Minocqua. Northword Press, Inc. 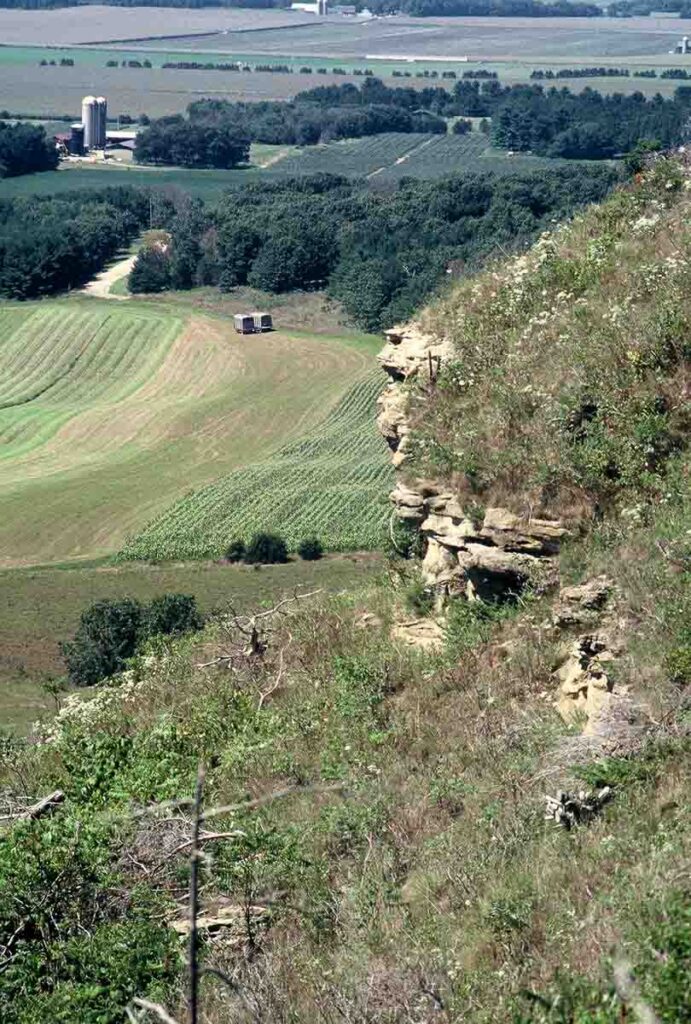