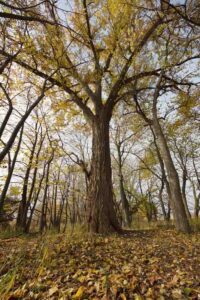 Eastern Cottonwood is well known for its seeds which ride the air on fluffy, cotton-like hairs.  For this reason the cottonwood is often a hated tree because the cotton clogs window screens and air filters.  If there are enough cottonwoods in an area the cotton can look like a blanket of snow, or accumulate in drifts on a breezy day.  This is the way cottonwoods transport their seeds to new areas.  If half the seeds of cottonwood trees took root and became mature there would be no place to walk on earth.  These trees produce millions seeds each annually.  The seeds of some Populus spp. are 4 million to the pound! 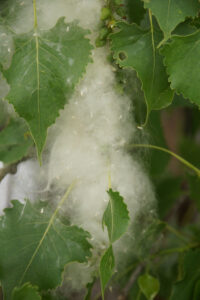 The fluffy seeds of the Eastern Cottonwood Tree

The trees’ broken and live stems are also quite capable of rooting where they fall, or get carried away on flood waters to root elsewhere.  Both strategies are good ways for a tree to reproduce and spread to new areas given its choice habitats of floodplain forests, lake shores and river sides.  The stems of cottonwoods break off easily, another reason homeowners don’t like them in their lawns, and many communities ban their planting.  Even though the cottonwood is most associated with lowlands, it does surprisingly well on upland sites as well.  In either situation the tree is resistant to ground fires, due to its thick, deeply fissured bark.

The Eastern Cottonwood is perhaps our fastest growing native tree in the Midwest.  They can exceed heights of 110 feet and diameters of 9 feet.  Three to four foot diameter cottonwoods are not uncommon, and are not usually that old.  A cottonwood my grandparents cut down was three feet in diameter and less than 50 years old.  They are often the tallest trees grown near rivers and lakes and are the preferred nesting sites of bald eagles where white pines are absent.  I know of three bald eagle nests within five miles of my house and all are in Eastern Cottonwoods. 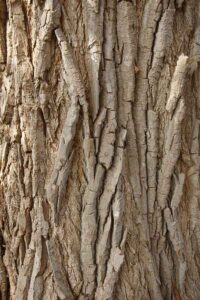 Like most fast growing trees the wood of Eastern Cottonwood is soft and weak.  It is made into pulp for paper products.  It is also sometimes made into plywood, pallets, and the interior of furniture.  A large cottonwood can make a lot of firewood, but a trunk three feet in diameter is hard to handle.  In the end you’ll end up with a giant pile of firewood that burns quickly and produces little heat for the amount of volume.  Back when people used wood for cooking the quick burning properties of trees like cottonwood was a good thing in the summer.  A person could get a wood stove up to temperature quickly, and when done cooking the fire would quickly fade.  Today we prize the dense hardwoods for keeping us warm, but that is quality not looked for in a kitchen in August.

Eastern Cottonwoods and related species were used by Native Americans for food, medicine and construction.  Leaf buds were used to make a green or yellow dye depending on the variety of tree found.  The immature seed capsules were used as chewing gum.  Children made toys from the trees, the seed pods became beads and leaves were constructed into toy teepees, and moccasins.  Girls and women even used the leaves to make a flute-like instrument. 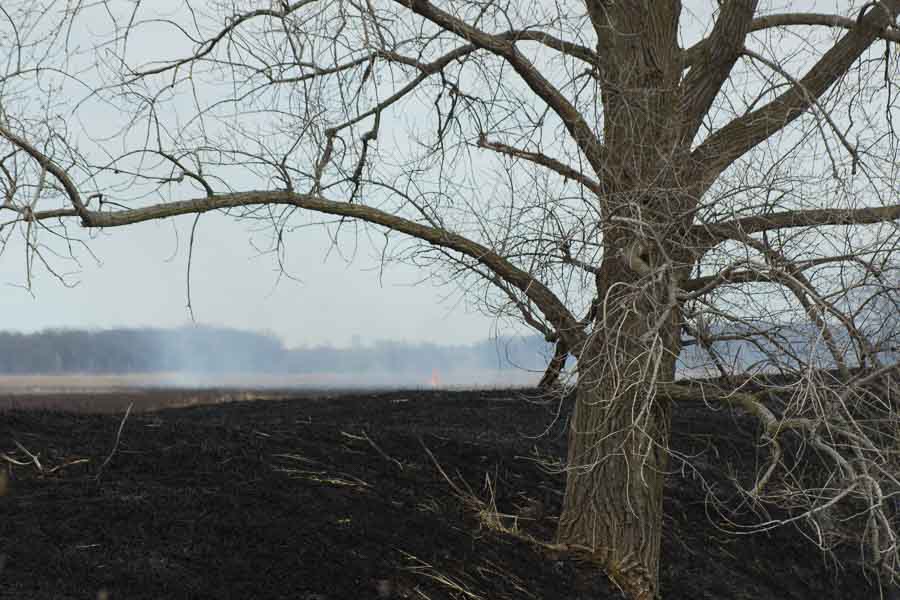 An Eastern Cottonwood’s (Populus deltoides) thick bark easily protects the tree from the flames of a prescribed burn. 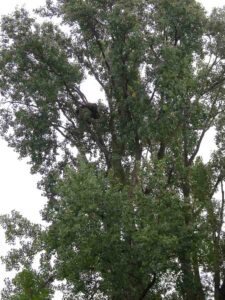 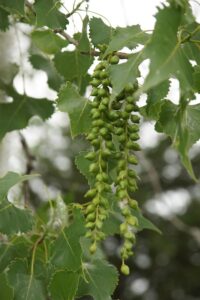 The seedpods of Eastern Cottonwood before they burst open with cottony seeds. 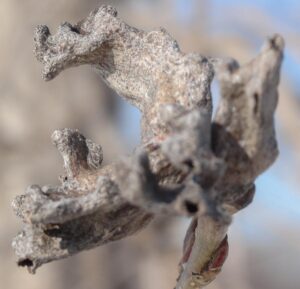 What looks like a fungal infection is in fact a gall made by an insect.