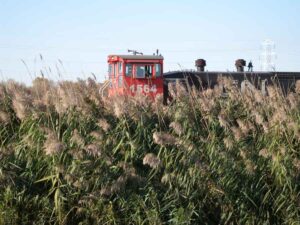 A dense stand of Invasive Phragmites

Phragmites or Common Reed is an amazing plant in the natural world and has been utilized by humans for thousands of years. Phragmites is found on every continent except Antarctica, in a variety of aquatic and wetland habitats.  The species can be divided into several varieties or subspecies, depending on the authority.  The European variety is now classified as a subspecies by many is highly invasive in North American wetlands. It will even out-compete and replace invasive cattails and its North American phragmites sibling.  It is most often found in wetlands but can also make its way to less dry uplands.

All varieties are very tall grasses and often much taller than other plant community members other than trees and small shrubs. 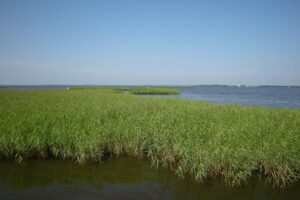 Like most wetland grasses and sedges, phragmites’ native strain is often found in thick stands that from a distance look like they lack other species.  However, often there is a variety of other much shorter wetland plants growing under the tall Phragmites.  This is because although the plants are tall, they grow less densely than the invasive variety, but I have seen them growing very densely in a few locations.

Invasive Phragmites takes over native wetlands in much the same way as invasive cattails do.  The plants grow close together and often are two to three times taller than most native vegetation.  They compete for nutrients and water, but it is light that they rob native plants most of.

The second major problem is that invasive Phragmites growth produces large amounts of dead leaves and stems that act as a mulch, smothering native plants, much like a gardener uses mulch to prevent the growth of weeds.  Phragmites grows fast, and large nutrient reserves in its roots and the relatively robust shoot can push its way up through the tangle of leaf and stem litter in spring.  More fragile sedge leaves have a much harder time coping with this situation. 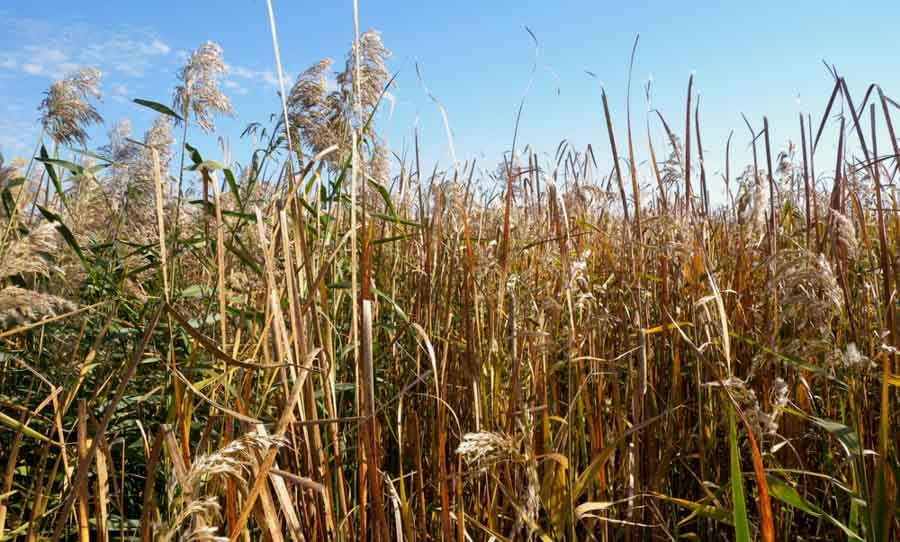 Non-native Phragmites is a much more robust plant than the native.  It is taller, has larger seed heads and leaves.   An excellent guide to the differences of phragmites can be found at http://www.wisconsinwetlands.org/phragbrochure.pdf 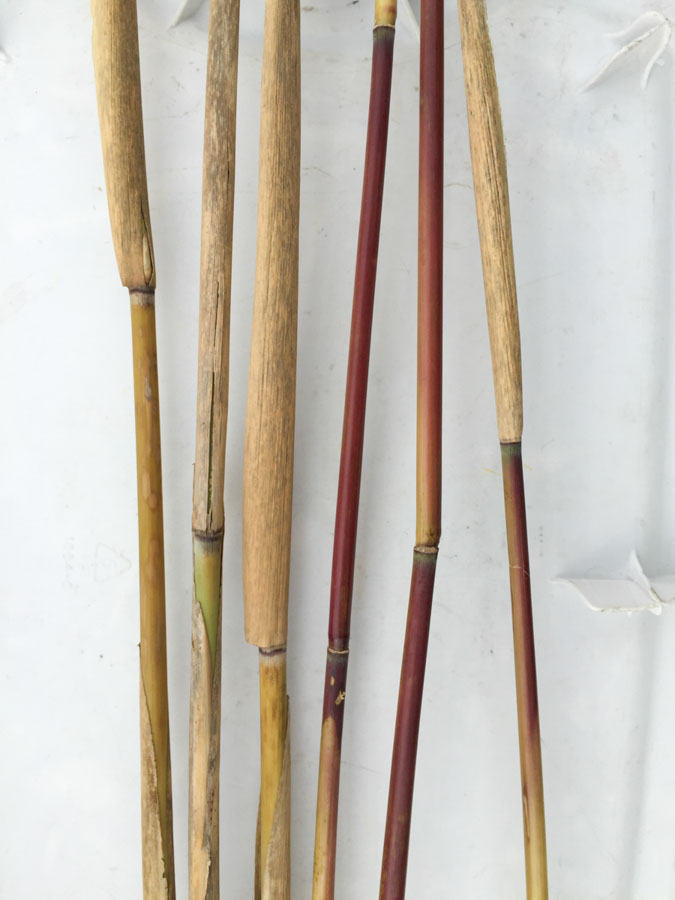 The reddish stem bases and general lack of leaves in the fall and winter indicate that the three stems on the right are native phragmites (Phragmites australis subsp. Americanus). The greenish stems and leaves’ presence are some of the indicators that the three stems on the left are from invasive phragmites (Phragmites australis subsp. Australis). Also, note that the non-native stems are generally thicker and more robust than the rest of the plant.  The photo was taken in late summer.

Human Use of Phragmites

Phragmites are still widely used as a building material, although modern materials have mostly taken their place in the developed world. However, in many European countries, the grass is commercially by hand, but more often by machines specifically designed for the task.  The main use of the Phragmites today is for thatching roofs.  A well-thatched roof made from phragmites will keep the rain out for decades and is said to outlast asphalt shingles.  A thatched roof’s advantage over an asphalt one is that it is a renewable resource and is biodegradable. In the past, Phragmites were used for arrow shafts, torches, baskets floor, and sleeping mats, and many other things.