All too soon it will be the that time of year when a few hardy birds from the north come down to spend the winter in the less harsh climate of the Upper Midwest.  One of those birds is the Northern Shrike (Lanius excubitor), a small bird of prey.  Shrikes are well known for their method of storing food.  Often the birds will catch small mammals, birds and in the summer large insects.  If the shrike wants to save a meal for later it will store, or cache its prey for eating later.  Many bird species like crows, ravens, and jays will do this.  What makes the shrike different is it does not hide its food, rather it is stored out in the open for all to see.

Shrikes are famous for impaling their prey on the thorns of hawthorns, and other thorny trees and shrubs.  There are a few of those in the marsh I was walking through, however there were plenty of cattails.  This shrike, or shrikes tightly wedged their food between the stem and leaf of cattail plants.  All the food I found stored in this manner were shrews, which are tiny predators themselves.  Shrews mainly eat insects and other invertebrates, but can take down mice with the help of their poisonous saliva. 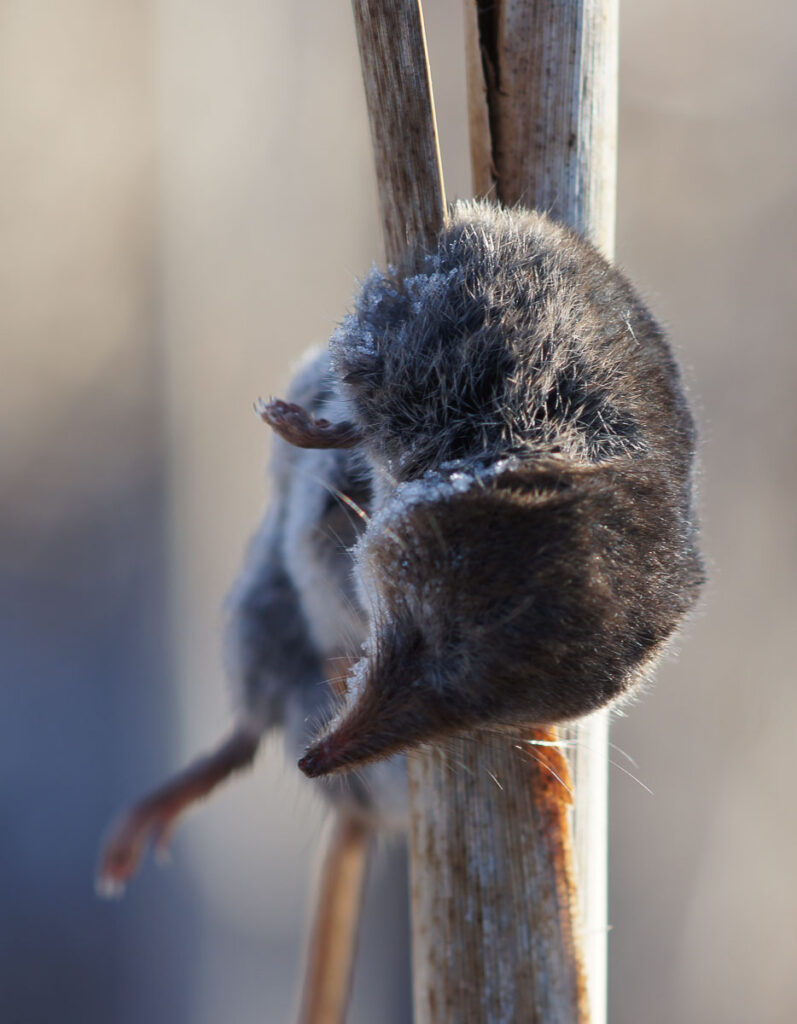 Shrikes are famous for storing their food by spearing it on the long thorns of some trees and shrubs. At least on Northern Shrike (Lanius excubitor) in this area has found that cattails (Typha sp.) make a good place to store food. While walking through this wetland one winter I notice three shrews, like this northern short-tailed shrew (Blarina brevicauda) stuffed between the cattail’s stem and leaves.

The day I took the above photo I found about half a dozen stored shrews, and no other animals stored on cattails.  I was far from shrubs or other places that could be used for storage, and unfortunately the marsh was largely covered with invasive hybrid cattails (Typha x glauca), but the shrikes took advantage of what they had.  I wonder if these shrews had been caught in the marsh, or the shrub carr habitat nearby.  In the marsh I found no tracks or tunnels of any small mammals and I don’t know if they are inhabited by them at anytime of year.  If the shrike did fly the shrews all the way over to this part of the marsh it must have been to avoid having another predator or scavenger find its food.

This entry was posted in Birds and tagged Cache, Northern Shrike, Shrew. Bookmark the permalink.