The Green Heron (Butorides virescens) is a small heron of about 18 inches in length with a wingspan of 26 inches.  It is well camouflaged, and like all herons it often remains motionless, but when it does move it makes slow  deliberate movements to avoid detection by its prey.  The Green Heron eats fish, frogs, and larger invertebrates found in the shallows of lakes, rivers and marshes.  Most often it catches its prey with a lunging stab of its long neck and bill.  However it will also occasionally dive from a standing position.

Green Herons usually nest alone in a tree or shrub above water.  However they are known to form small colonies or join the colonies of other bird species.  Both parents raise the young.  These birds breed primary in North American, including Mexico.  Mexican birds often do not migrate.  In winter most of the American birds migrate to Mexico, Central America, northern South America and the Caribbean. 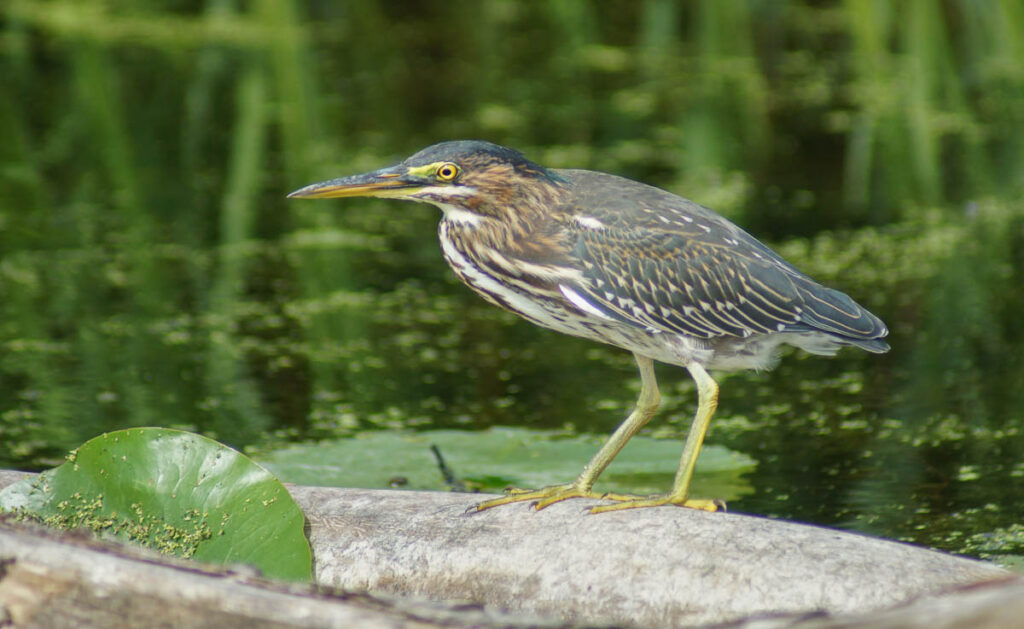 A Green Heron (Butorides virescens) stalking fish on a log.

I found this young Green Heron skulking on log, on the Fox River in Green Lake County, Wisconsin.  It noticed me and slowly tried to sneak away when I stopped my boat to take photographs.  Peaking through the viewfinder it was hard to locate the bird at first thanks to its camouflage and slow movements.  When Green Herons became alarmed, as this one eventually did, they flare a small crest and make a kuk, kuk, kuk, kuk noise, at least that is how it is described the Sibley Guide to Birds.  I find Green Herons to be fascinating residents of my local lakes and marshes.

This entry was posted in Birds and tagged Birds, Fox River, Green Heron. Bookmark the permalink.