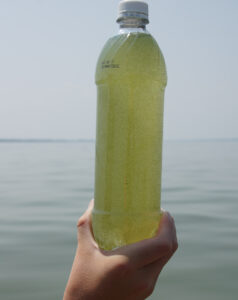 The water in this bottle contains millions of algae cells, from an algae bloom. Most of them are blue-green algae.

Although the temperature has not been excessively hot, blue-green algae blooms are in full swing on the Lake Winnebago System.  Everything is in place for such algae blooms:  warm temperatures, calm weather and excessive nutrients in the water.  Many types of algae can be found in the water column.  Regular old green algae, diatoms and others are valuable parts of the food chain, but blue-green algae or cyanobacteria are less desirable because they are of lower food value, and because on occasion they can produce toxic compounds.  The bloom over the last few days contained numerous blue-green algae commonly associated with the blooms:  Microcysts, Anabanea, as well as several others.  I looked at several samples under the microscope and all I could find were blue-greens, no green algae or diatoms in the soup.

The accompanying photos were taken on Lake Poygan, but the other lakes and rivers in the shallow system are suffering the same blooms.  Despite the green water, there were plenty of boats on the lake and swimmers in the water.   Thirty boats were parked along the Cane Beds off of Lone Willow Point between Lake Winneconne and Poygan.  Many stayed on the boats enjoying the beautiful weather, but others splashed around in the sun.  Most people who enjoy these lakes are used to the green water of summer.

Boaters and swimmers enjoy a great day on Lake Poygan and Winneconne despite the green water.

Why was the Algae Bloom Bad? 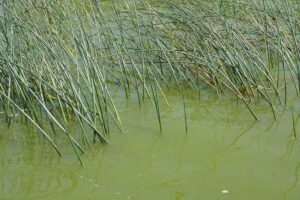 For one, calm weather increase the chances of algae blooms. Waves keep pushing phytoplankton down to where there is less light, and in some lakes, cooler water.   This slows their growth.  When the waves are reduced, algae accumulates on the surface where temperatures are greatest, and light is most intense.  There they are free to reproduce rapidly until a thick soup forms.  This bad situation can be made into a nightmare for lake shore property owners when winds return and blows the algae into shore concentrating it into a smelly scum.

Update:  Later on in the year, September, I took a video from above showing another, smaller algae bloom along with some of Lake Poygan’s cane beds.