The wood turtle (Glyptemys insculpta) is a long-lived species that primarily lives in river bottoms, frequenting both the streams and surrounding areas.  The wood turtle is omnivorous its diet consisting mostly plants, but also slow moving animal prey. 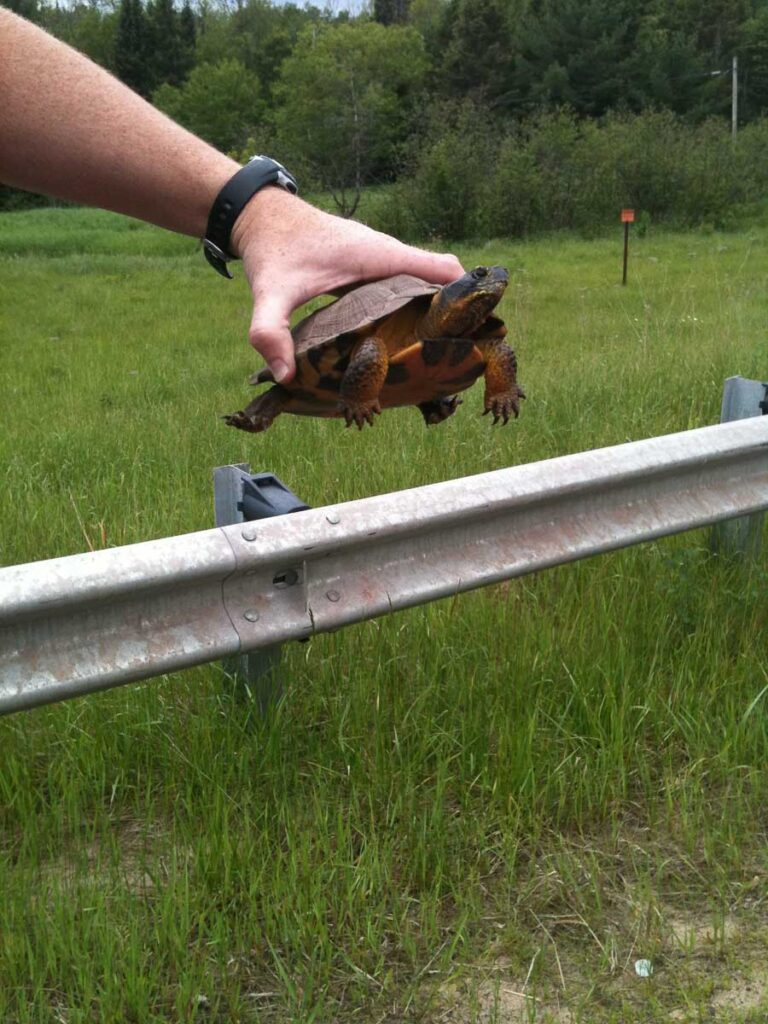 Helping a wood turtle across a highway in the UP of Michigan. Fatalities from cars are one of the main causes of turtle mortality.

The species takes a long time to reach sexual maturity 14-18 years and does not lay many eggs (3-18).  This low level of reproduction and high nest predation often by over populated omnivores such as raccoons means the chance that any one nesting will produce offspring to adulthood is very low.  This probably was not much of a problem before advent of cars which kill adult turtles as they travel daily and especially females during the nesting season.  Adding to the turtles trouble is habitat destruction, from agriculture, and expanding cities, and the building of houses and lawns near streams.

For these reasons the wood turtle is listed as endangered, threatened, or protected in much of its range.  In Wisconsin, for example, it is listed as threatened and the Michigan turtle in the photo is a protected species.

I found the turtle in the photograph on a bridge, and seemingly have a hard time figuring out how to cross.  I would imagine turtles are near-sighted and the concrete wall of the bridge seemed never ending on either side.  I crossed the bridge, put on my hazard lights, parked the car, picked up the turtle, took a quick photo and walked it down to the stream below.  The turtle was much heavy than it looked when compared to painted turtles.

Not long after I found a common snapping turtle laying her eggs about a half inch from the asphalt on the shoulder of the same highway.  I did not try and help her find a more suitable nesting location.  If you are the kind of person that helps turtles across the road be very, very careful to avoid cars, not to mention the claws and snapping mouths of the turtles.

This entry was posted in Photo of the Week and tagged Wood Turtle. Bookmark the permalink.