The Northern Pike (Esox luscious) is a voracious predator primarily of fish, but pretty much anything else it can fit down its throat, from frogs to muskrats.  The fish typically live in the shallower parts of lakes and slower moving rivers, lurking in cover to ambush their prey at high speed with a combination of rapid tail movements and jet propulsion by pushing water through its gills.  In spring, shortly after ice out and sometimes before, they begin heading into flooded marshes if available, or the weedy parts of lakes where emergent vegetation from the previous growing season is present.  It is here the Northern Pike spawn during the night in as little as six inches of water. 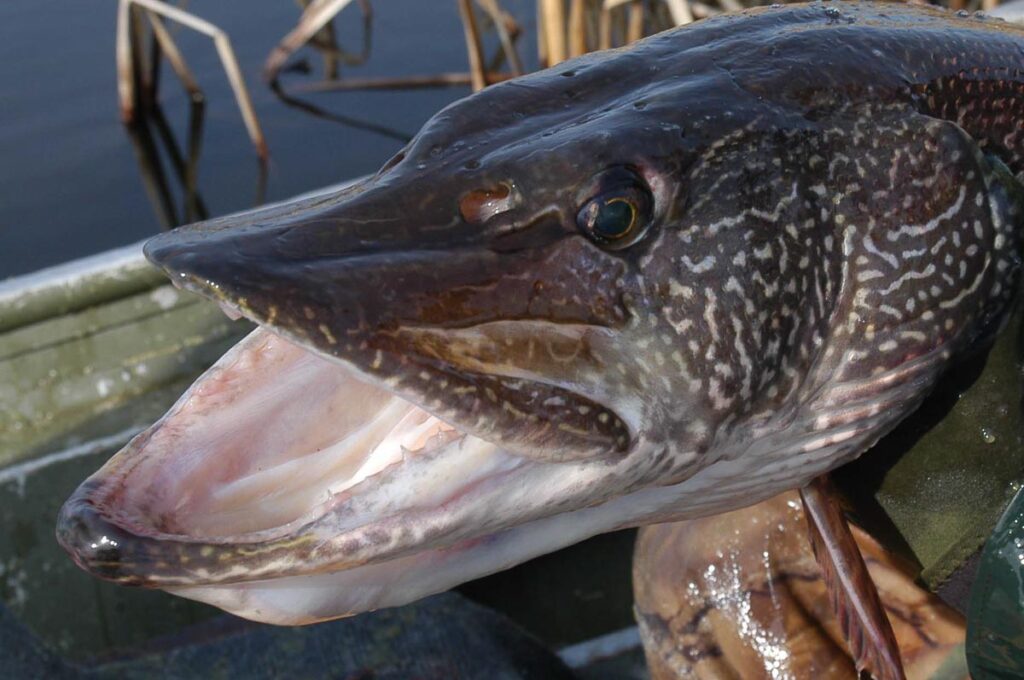 Northern Pike caught during a DNR fishery survey on the Wolf River, WI

To get to the optimum spawning places some fish will swim a fair distance.  Shallow marshes composed of sedges and grasses are the preferred places for egg laying.  There is a lot of surface area on this vegetation to attach the eggs and the buoyancy of the dead leaves may provide a way to oxygenate the eggs and fry, which attach themselves to the vegetation after hatching.  Unfortunately, many marshes are being invaded or converted to invasive, non-native cattails (Typha spp.).  According to one older study, cattails were the least preferred substrate for spawning Northerns, the fish even favored oat stubble to cattails.

The adult fish either head into marshes that are adjacent to lakes and large rivers, or migrate up streams to them.  While in the streams and shallow marshes the smaller adults are vulnerable to bald eagles, and all are vulnerable to humans in the form of poachers.  Northern Pike usually do not eat during spawning, and do not defend their spawning area like the sunfishes, so are infrequently caught during this time.

The females attach their sticky eggs to the upright vegetation and then the eggs are quickly fertilized by several attending males which bash the females to help release eggs.  As with many other fish, the female Northerns are significantly larger than the males.  The larger the female the more eggs she can carry—100,000 or more, whereas a small female may only carry 8,000 eggs.  Having laid and fertilized their eggs, the females and males leave the eggs to develop unguarded and at the mercy of predators, which are mostly insects at this stage.  It is just as well they leave, because Northern Pike are cannibalistic and readily feed on their own kind. 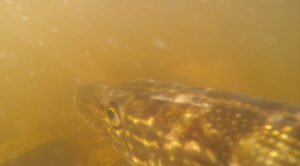 After the eggs hatch they are in a larval stage and continue to gain nourishment from their yolk-sac.  They don’t even have developed mouths yet, but those will quickly form and the fry will begin feeding in 4-15 days.  Fry leave the vegetation they are attached to and they begin to feed ravenously on phytoplankton and later insects.  Somewhere between 18-24 days after hatching they begin to leave the marshes and head to rivers and lakes.  At this time they are about 20mm long and are food for just about any other game fish.  It is crucial that the tiny fish have nursery habitat, aquatic vegetation and other cover to hide from predators.  Northern Pike grow rapidly in most habitats and many of the bluegills and perch that may have gobbled them up in the month of May will be on the Northern Pike’s menu by the following year.

I often visit a little creek, a tributary of the Upper Fox River in NE Wisconsin, which is along the way to a great marsh for Northern Pike spawning.  The creek is murky with dissolved organic matter, and tannins from decayed vegetation.  The water also carries sediment eroded from farm fields, the stream banks, and other natural sources.  The pike are met with a dam and a fish barrier and cannot complete their journey.  The fish barrier is in place to prevent carp from getting into the same marsh where they also spawn while uprooting vegetation.  They would also stay and continue to destroy the ecosystem, so the migrating Northerns gather at the base of the dam and fish barrier exhausted after repeated attempts to make the jump.  Some small yellow perch are able to make it through the barrier to spawn, but only the tiniest pike could ever make it through the bars of the fish barrier.  Watching them is fun, but it is also a somewhat sad spectacle.  However, this is necessary to keep the carp out.  If the carp got in and stayed they would destroy most of what the Northern Pike were looking to spawn in anyway.

This entry was posted in Fish and tagged Fish, marsh, migration, spawning, Wetland. Bookmark the permalink.