The Power of Ice 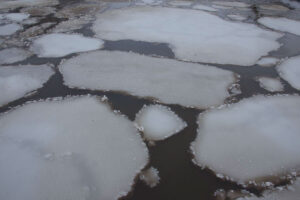 In Wisconsin we should know better, but we forget that ice is power.  Our lakes like to remind us of this, with crystalline beauty and crushing power of ice with wind at its back.  Winnebago was gouged out by the Green Bay Lobe of the Wisconsin Glacier.  That lobe of ice made the bathtub that is Lake Winnebago.  As the ice sat there it dammed what we know as the Fox River and created glacial Lake Oshkosh which spread across the landscape, many times larger than Lake Winnebago.  The glacial drift, the rocks and sand filled in gorges under the lake.  As fine sediment dropped out of the water of that lake, it created a flat lake bed of clay and silt which is what Oshkosh and much of Winnebago County is.  My house sits on that old lake bottom.  When the glacier receded, Glacial Lake Oshkosh drained out the Fox River to Lake Michigan, and the deep basin filled up as Lake Winnebago, and so the landscape we know was formed. 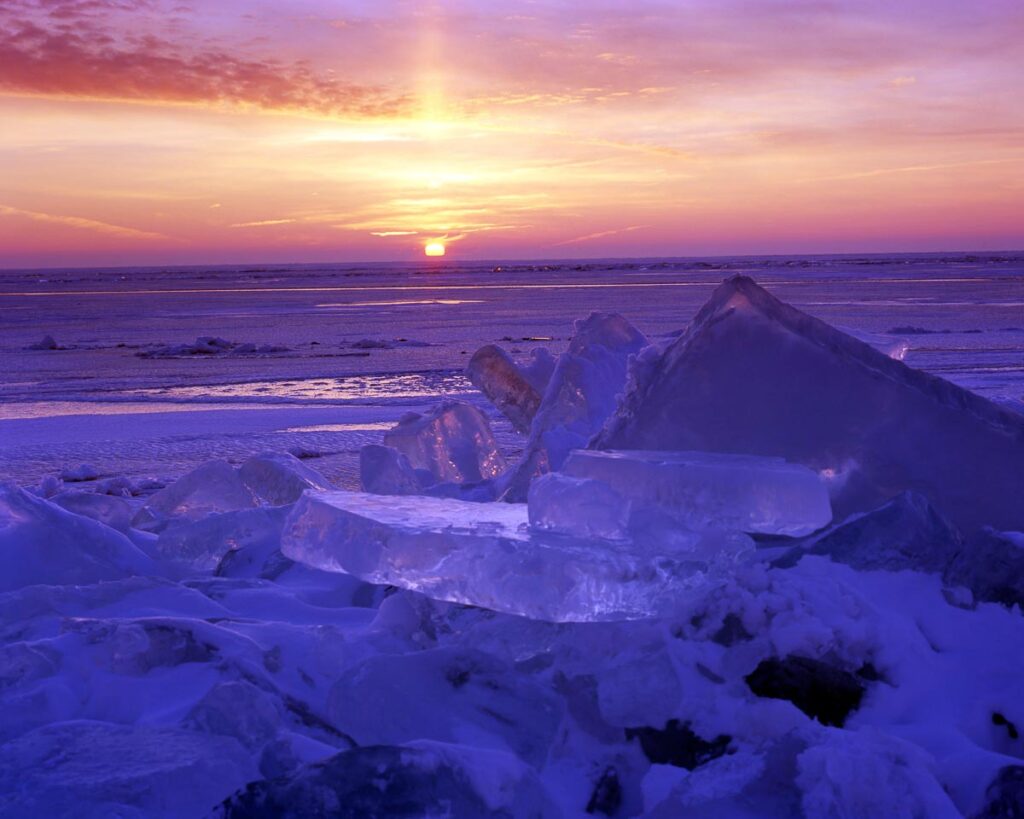 A view of a Lake Winnebago ice shove one cold morning (6 degrees F) in December. Usually ice shoves occur in spring when the ice begins to “rot” and becomes cloudy. This ice was 5-6 inches thick and crystal clear. I wanted to take more photos that morning, but my fingers were very painful from the cold.

The ice on the lake this winter is a thin child of the mile high monster that carved out the lake, but it is still a force to be respected.  Water is a very unusual molecule with the most peculiar of traits.  As it changes from a liquid to a solid by cooling it gets larger, unlike everything else we experience.  It only expands a little, but over the span of miles it adds up.  It also expands with tremendous force.  Think of the expansion of water into ice bursting through iron pipes.  Ice is a nearly unstoppable force to be reckoned with.

Ice can be brutal, but to many it is as much a source of delight as it is danger.  Snowmobiling, ice fishing, walking, ice skating, hockey, or just running and sliding are a few of the activities to enjoy on the ice.  Ice in an equalizer, it provides everyone access to the lake.  Fishermen, walkers, and wildlife watchers without boats are no longer confined to the shore, docks or bridges.  All fishermen can now wander out onto the lakes with a bucket and the most simple of fishing gear.  Ice does not discriminate based on one’s economic standing.  Thin ice or cracks can swallow up an SUV or a person on foot just as easily, and every year someone goes down and, sadly, all too often does not come back up.  Ice demands respect. 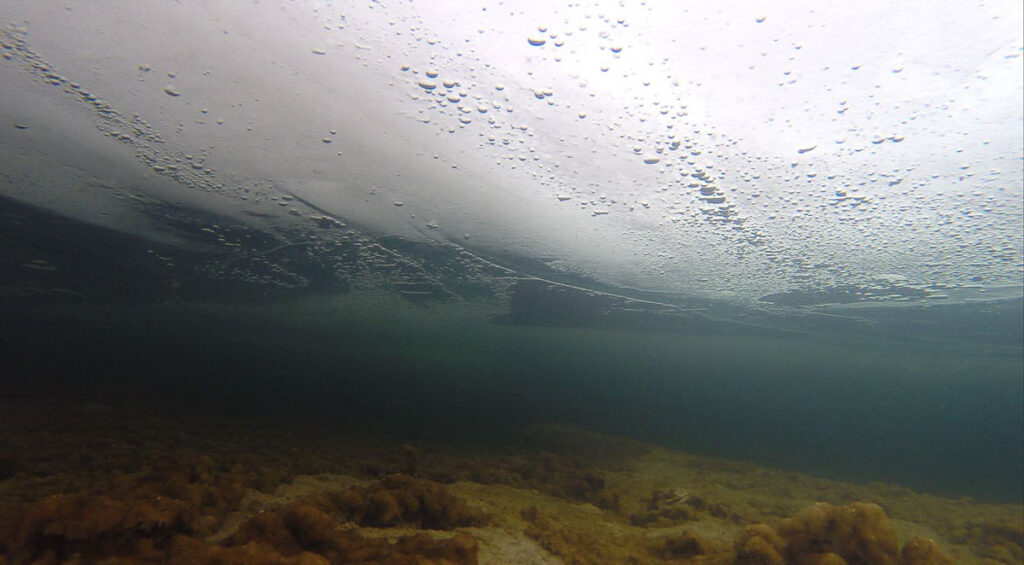 A view from under the ice of Fountain Lake

Like everything to do with lakes, ice is controversial, especially on reservoirs.  For over a hundred years the water level of the Winnebago system is drawn down throughout the winter to make way for the snow melt and spring rains.  This also has the perceived benefit of reducing ice damage.  While there may be some benefits to shore protection from ice expansion, it does little to prevent damage from ice shoves.  Ice shoves on Lake Winnebago can climb uphill, reaching spectacular heights in no time with the right wind, and like miniature glaciers bulldoze nearly everything in their path.  The dams that control water levels cannot physically draw the lake down far enough to prevent this damage, and if they could there would be severe damage to habitat that fish and wildlife depend on.

On calm nights with the temperature dropping you can hear the ice boom as it contracts and cracks.  Walk along the shore of Menominee park if you are unsure of the ice on one of these nights and you can hear the power building.  The ice is restless.  The constant shifts of temperature changes, the sun, and the wind are always weakening the ice even as it gets thicker.  It can take months for ice to be thick enough to support the weight of a car, but in a few short weeks it degrades, and “rots,” and the wind will pile it up on shore.  Lake ice is something of a troubled teenager struggling to be noticed as it makes its way in the world in the shadow of a famous glacier parent.  It tries hard to get noticed by being beautiful, smooth and pure in its youth, but soon it throws tantrums, creates trouble, and then burns out, has a summer rehab, builds up to something delightful, and throws another tantrum.

The preceding article is an expanded version that previously appeared in the Oshkosh Scene newspaper.

This entry was posted in Other. Bookmark the permalink.