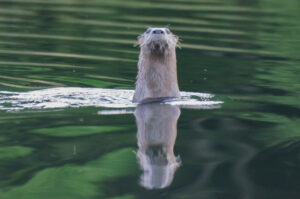 A River Otter keeps an eye on some canoers

Sometimes wildlife is just as interested in you as you are of it.  One September camping trip with the family I was sitting around the fire, but gazing across the lake.  It was late morning, the lake was calm and the skies were overcast.  I noticed something on the other shore about 250 yards away.  It had a strange gait as it ran along the shore and quickly disappeared.  I stared for a minute, ran up to the car, and grabbed the binoculars.  I thought it must be an otter or a giant mink, but they’re extinct.  After I returned with the binoculars I waited and waited but did not see anything.  Then I noticed something in the water and looked with the binoculars.  Sure enough, River Otters.  A little family.  My family came to look at them, but they were now too far away for a good look even with magnification.  I decided to run down to where they were, but they stayed away from me.

My wife and oldest child took to the canoe to get a closer look.  After a while they returned and said that the otters were curious and approached the canoe, not the other way around.  I took the canoe and the other two kids and headed over to the far side of the lake where the otters were last seen.  They were hanging out in a small bay.  They spotted us, observed for a minute, and then approached the canoe.  We stopped paddling and stayed put on the calm water.  The otters began circling, alternately swimming under water, surfacing, snorting, and standing as straight up out of water they could to get a good look at us.  When they completed their circle around us, we headed back to camp to leave the otters in peace to fish.  Otters are amazing creatures and I felt fortunate to have gotten a good look at them.

I returned for another camping trip in October.  As we looked out over a different lake near to where I had seen the otters in September we saw another group of three.  Most likely this was the same family.  The small scattered northern Wisconsin Lakes are probably too small to support a family all year.  Not that there are not enough fish, but I suppose the fish get wise to otters and become difficult to catch.  Or maybe otters like variety.  From shore the otters were not very interested in us this crisp fall afternoon; it was probably the novelty of people floating on water that drew in the curiosity of the otters earlier in the year.  This time I watched the otters only for a few minutes; perhaps my curiosity was also satisfied.

This entry was posted in Wildlife and tagged River Otter, Wildlife. Bookmark the permalink.